What You Need to Know About Fiber Optic Cables

Fiber optic cables are the cornerstone of modern communications, distributed in all corners of the world, linking the entire world into a network. It is precise because of the existence of this network that people in different locations can do many things together on the Internet, such as video chat, online courses, watching movies, games, and communication.

Fiber Optical cable is so important, now let’s get to know the optical cable. Here is a summarize the content of this article. 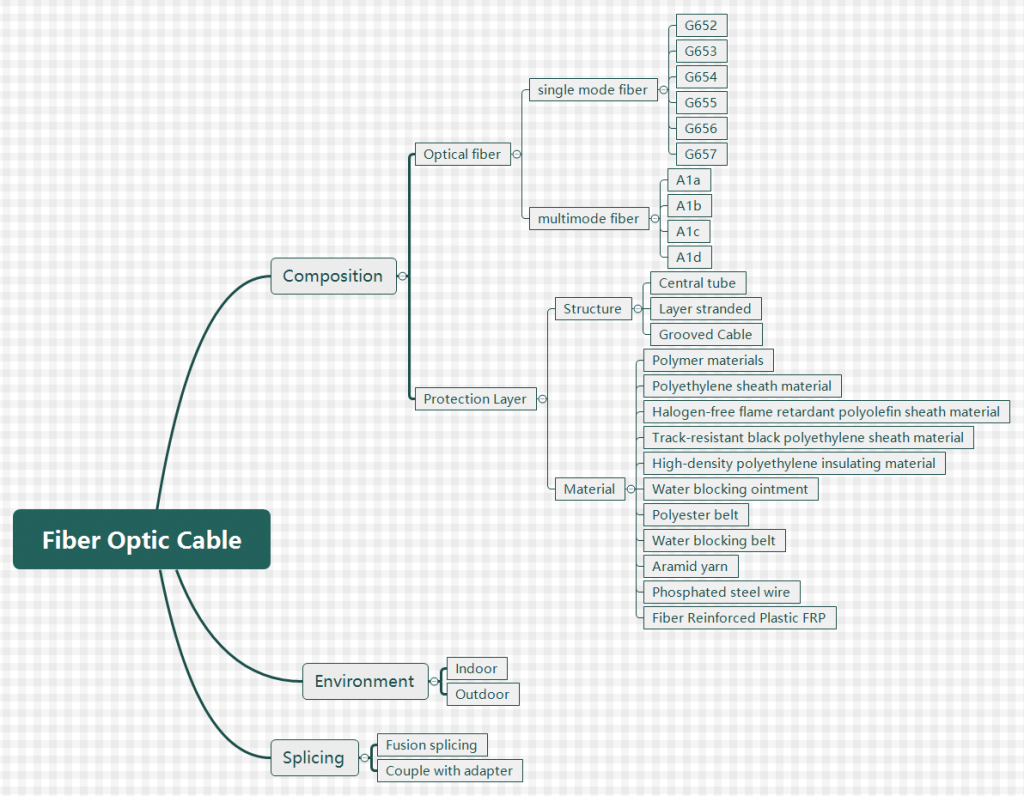 2.  The foreskin refers to the protective outer skin wrapped around the fiber core. The function of this part is mainly to protect the core from damage. Because the optical fiber is very fragile, during the installation process, the external environment may damage the optical fiber, making the optical fiber unable to work normally.

1. The composition of the Fiber optical cable

Optical fiber is the core part of fiber optic cable. The diameter of the fibre core can be different:

When the core diameter of the fiber is 9um, only one mode of light can be transmitted at the same time, which is called a single-mode fiber.

When the core diameter of the fiber is 50um, 62.5um, or even larger, it can transmit multiple modes of light at the same time, which is called multimode fiber.

According to the definition of ITU, there are several types of single-mode fiber, such as G652, G653, G654, G655, G656, and G657, each of which has its own performance characteristics and is suitable for different occasions. Here is a brief introduction to the basic characteristics and application scenarios of different optic fibers:

Often called dispersion-shifted fiber (DSF=Dispersion Shifted Fiber), its zero-dispersion wavelength is shifted to 1550nm, where the loss is extremely low; Disadvantages: AT&T in the United States discovered the serious deficiency of DSF in the early days, and there are harmful four-wave mixing in the low-dispersion region near 1550nm. Fiber nonlinear effects such as frequency, etc., hinder the application of fiber amplifiers in the 1550nm window.

Application scenario: a broadband system of DWDM and CWDM.

Application scenario: FTTH and other places where the space is small and the bending radius is high.

Multimode fiber, that is, G651 fiber defined by ITU. Initially, the International Electrotechnical Commission recommended four graded-index multimode fibers with different core/clad sizes, namely A1a, A1b, A1c, and A1d. Their core/cladding diameters (μm)/numerical apertures are 50/125/0.200, 62.5/125/0.275, 85/125/0.275 and 100/140/0.316, respectively. Generally speaking, a large core/package size leads to high production cost, poor bending resistance, an increase of the number of transmission modes and a reduction of bandwidth. In addition to the above shortcomings, the 100/140μm multimode fiber has a large cladding diameter, which does not match the test equipment and connecting devices, and is soon not used in data transmission, only for special occasions such as power transmission. 85/125μm multimode fiber is being phased out for similar reasons.

However, with the increasing demand for bandwidth, the local area has developed from hundreds of megabits of bandwidth to 1G and 10G. Only the 62.5/125um multimode fiber that supports hundreds of megabits of bandwidth is obviously unable to meet the requirements. Multimode fibers with a core diameter of 50um have begun to be applied on an increasingly large scale. 50/125μm fibers have smaller numerical apertures and core diameters, higher bandwidth than 62.5/125μm fibers, and can reduce production costs by 1/3.

Another reason for using a 50-µm core is that the advantages of multimode fibers with a 62.5-µm core were previously viewed as being irrelevant with advances in light source technology. In the early and mid-1980s, LED light sources had low output power, large divergence angles, and large connector losses. Using fibers with large core diameters and numerical apertures to inject as much optical power as possible must be considered. With the application of the VCSEL light source, optical power injection is no longer a problem, core diameter and numerical aperture are no longer as important as before, and the transmission rate of 10Gbit/s has become the main contradiction, which can provide a higher bandwidth 50μm core diameter multimode Optical fiber is very popular. OM1->OM2->OM3->OM4 is the road of continuous improvement of multimode fiber performance, with larger and larger transmission rates and longer transmission distances. For the differences between OM1, OM2, OM3, and OM4, please refer to the xxx link. At present, there is already OM5, but it has not been widely used. In the future, it is more likely to have OM6, OM7…

Another important part of the fiber optical cable is the protective layer that contains reinforcement, jacket and other protected materials. The outer layers itself does not participate in the transmission of optical signals. Its function is to protect the fiber core from damage. It determines the mechanical properties of the optical cable, which are determined by the material and structure. In different use environments, different materials and structures are required. 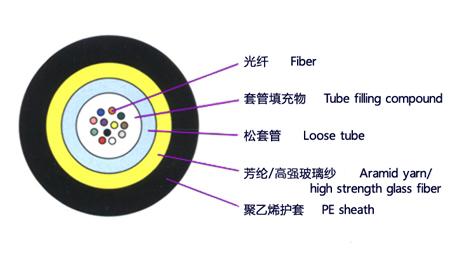 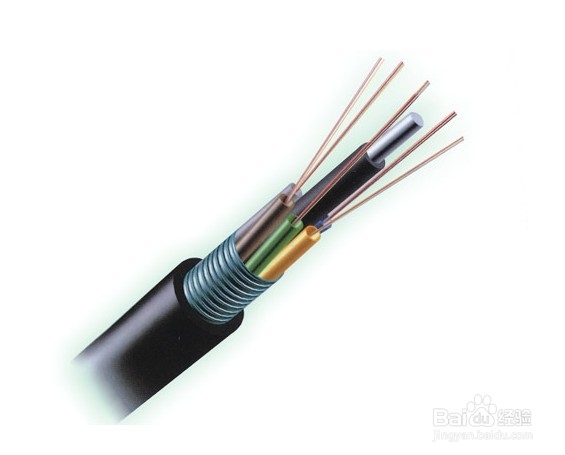 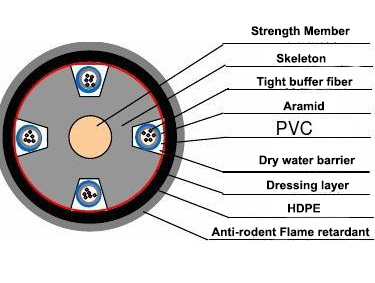 Grooved cable: This is rarely used.

The disadvantage is: that the manufacturing equipment is complex and a dedicated skeleton production line is required. There are many process links, and the production technology is difficult.

Below is the main raw material for the protection layer of fiber optic cable.

High-density polyethene insulating material is known for its excellent mechanical properties, chemical stability and good electrical properties. It can be used as a skeleton and a filling rope material in optical cables, respectively.

The optical fiber is extremely sensitive to the hydroxyl radicals produced by water and moisture; in order to prevent water and moisture from penetrating into the optical cable! It is necessary to inject the fiber with water Fillingcompound into the loose tube longitudinally and fill the other gaps in the longitudinal direction of the cable core with the cable resistance. The flooding compound is designed to prevent the longitudinal seepage of water to the loose tube and the cable core after the rupture of each sheath.

Polyester tape is used as a wrapping material in fiber optic cables. For example, in a layer stranded fiber optic cable, the cable core is centred on the metal central strength member or the loose tube is twisted around the central strength member. The gaps between the loose tubes are filled with water blocking ointment for the cable, and finally the polyester The tape wrap constitutes the finished cable core.

The water-blocking tape is a tape-shaped material formed by adhering water-absorbing resin to two layers of polyester fiber non-woven fabric with an adhesive. When the water infiltrated into the optical cable is in contact with the water-absorbent resin in the water-blocking tape! The water-absorbent resin quickly absorbs and penetrates Water, its own volume rapidly expands hundreds or even thousands of times. The expansion volume fills the gaps of the optical cable, thereby Prevent the further flow of water in the longitudinal and radial directions of the optical cable to achieve the purpose of blocking water.

Aramid yarn is placed between the inner and outer jackets of the fiber optic cable to give the cable a large longitudinal tensile strength.

(2) Fiber Reinforced Plastic FRP, non-metallic reinforcement, The main features are lightweight, good mechanical properties and anti-electromagnetic interference. The central reinforcement in the ADSS optical cable on the high-voltage power transmission line should be a glass fiber reinforced plastic reinforcement to avoid the effect of lightning and electric fields.

The choice of material and structure in actual use is determined by the specific applications, and the cost is also considered. In general, the environment can be divided into two parts:

Outdoor applications are generally divided into:

There are two ways to splice the optical cable, one is fusion splicing,

The fiber optic cable is packed as drum, each drum has a limited length, usually 2~3km. So fusion splicing is needed when deploy as in real applications the cable needed is much much longer than a drum length. The fiber optic splice closure is needed to protect the splice point where fusion splice is done. 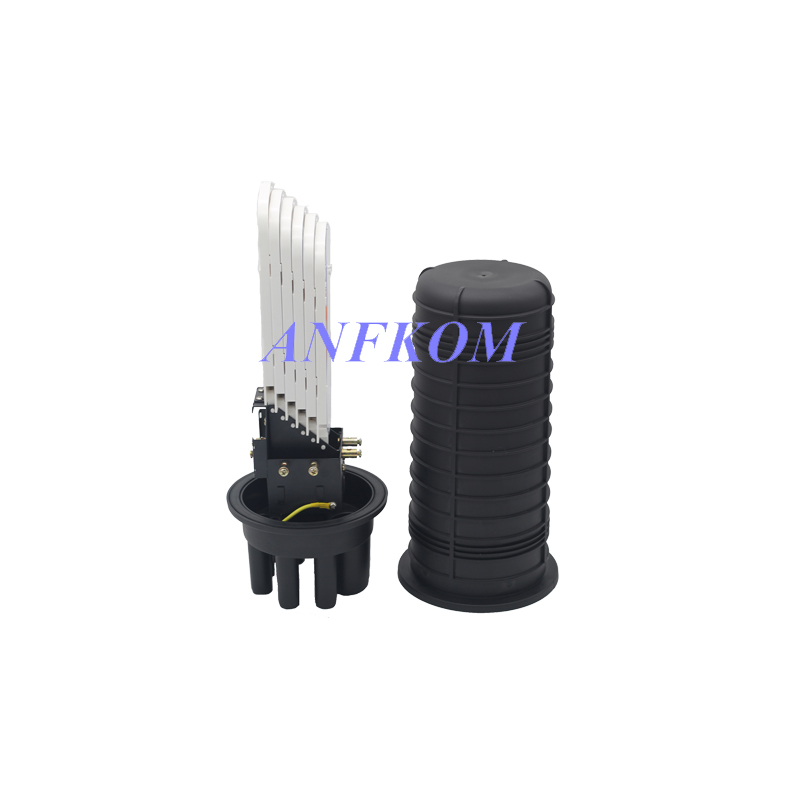 The other is through couplers. The fiber cable is preconnectorized and splices the two optical cables through the adapter to match the butt connector. The fiber optic cable which is preconnectorized is called fiber patch cable or patch cord. This is for a quick connection between two points not far away from each other. Usually for indoor applications or used in cabinets or distribution boxes.