Let us see a picture first, then you will have a general impression of what the MU connector is. 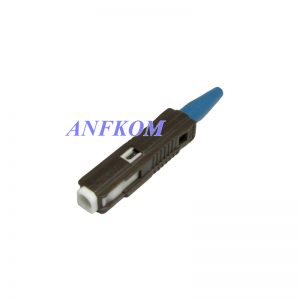 MU connector has a similar style to SC connector with a pull-push mating mechanism. But it is much smaller, almost half size of SC connector, with a 1.25mm ferrule, while most other connectors are with a 2.5mm ferrule at that time.

The MU connector system was developed by NTT in the 1990s. It has been successfully installed in NTT’s communication network since 1993 and kept growing in the following years.

At that time, the popular connectors are ST, FC, SC, which have a 2.5mm ferrule. A great number of optical connections which take up a limit space are required in the advanced transmissions. A smaller connector is expected to come out. The basic element of a connector is its ferrule, so if the connectors are to be miniaturized, the first step is to miniaturize the ferrule. NTT select 1.25mm as its aim and developed the 1.25mm ferrule, then adopted in the MU connector system. This 1.25-mm ferrule is now employed in other compact optical connectors worldwide.

The MU backpanle connector is designed to eliminate the pressing force on the back panel. To realize the physical contact, two connector ferrules are butted against each other with coil spring which generates a force on the ferrule. In conventional backpanel connectors, the coil spring exerts pressure directly onto the backpanel. Ant the pressure will be increased in proportion to connector number mounted on the back panel. The pressure may cause the backpanel deformation. MU backpanle connector’s self-retentive mechanism is developed to solve this problem.